When I returned home from Chicago last Monday, I had every intention to sit down and pound out a several hundred words on my running experiences in the Windy City. However, there was something preventing me from doing that: exhaustion.

The physical and mental fatigue had less to do with all the miles I’d logged on this very long weekend and more to do with the nature of the trip, which was a much-needed reunion with old college friends. There were seven of us in total, and when we weren’t reminiscing, catching up, and ball busting, we seemed to be eating and drinking our way through the city.

Shockingly, I did manage to get in a fair amount of running while I was away, a few windows of healthy living in an otherwise unhealthy journey into the world of grilled sausages and Old Style tall boys.

Run #1 – Geneva, IL
The day before meeting up with my friends in Chicago, I spent time with family in Geneva, a small town about an hour west of the city. Before having a sundae at Graham’s Fine Chocolate and Ice Cream and checking out a Kane County Cougars game, I logged a few early morning miles along the Fox River Trail. Unfortunately, recent storms caused the river to jump its banks a little, soaking part of the path near the pedestrian bridge. I didn’t think it was very deep. I was wrong.

Run #2 – Rock ‘n’ Roll Chicago 5K
As we planned our trip my friend Todd, who’s taken up running over the last couple of years, suggested we sign up for the Rock ‘n’ Roll Chicago 5K. I thought it was a great idea… until I realized it would involve getting up at 6am on a Saturday morning during a weekend that was destined to be beer soaked. I double checked with him; was he sure he wanted to run this race? Like really sure? Really? Unfortunately, he was.

The morning of the race was tough. Todd and I returned to our AirBnB in Wrigleyville around 1am after a solid (but not crazy) night of adult beverage consumption. We logged about five hours of sleep, got up, ate a light breakfast, and took the ‘L’ down to the Loop. The weather was fantastic – sunny, clear, warm – and the race through Grant Park was flat and fun. It was less crowded than I’d imagined and I ran really well, posting a 25:10, which is one of my fastest times. The clear and undeniable lesson is that a lot of beer and a lack of sleep are the keys to crushing a 5K. 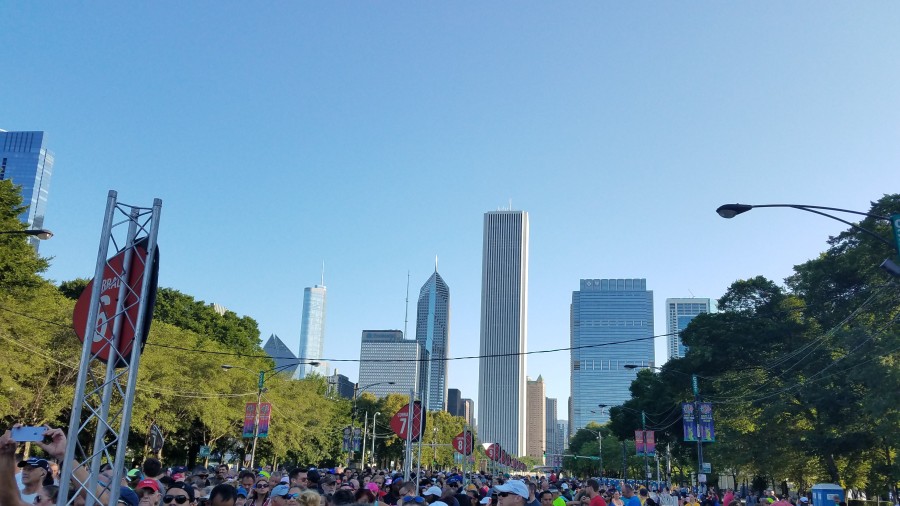 Quick side note… in my post recapping the Rock ‘n’ Roll Seattle Half, I wrote about a unique character I saw on the course, an eccentric, bearded man who held speakers in each hand and seemed to be dance-running the half marathon. As I was awaiting my bib number, that same guy walked by (speakers in hand), saw my Rock ‘n’ Roll Seattle shirt and said: “Hey, Seattle, we ran that.” My response was simply, “Yeah. I know. I saw you.” Had I been more awake and alert, I might have pursued a more inquisitive conversation, one where I could’ve asked him why he was running Chicago or why he chooses to run with speakers or how much time it takes to groom his beard. But alas, that conversation did not happen. I’ll save it for the next time I see him at a Rock ‘n’ Roll event.

Run #3 – Lakefront Trail
When I was planning this trip, I was hoping I’d be close enough to the Lakefront Trail to run there. I’d never had the chance based on the fact that my sister and her family have never lived particularly close to it and that most of my many visits to Chicago came before I was bitten by the running bug. Yet despite this desire to run alongside Lake Michigan, I wasn’t sure how I’d be able to work this into my weekend due to the 5K and some scheduled hangovers. But on Sunday, my last night in town, I decided to make it a priority. I set my Monday morning alarm for 7:30am determined to get in this run before heading to the airport. So on a sun-drenched morning, as locals made their way to work and school, I squeezed in a mellow 3-miler, spending half my time on the Lakefront Trail itself and the other half on the more scenic paths along the water. As you can see from the pictures below, it was totally worth it. 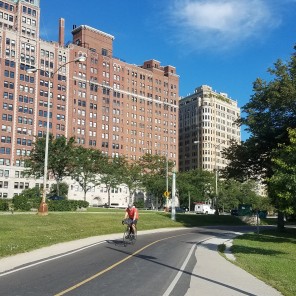 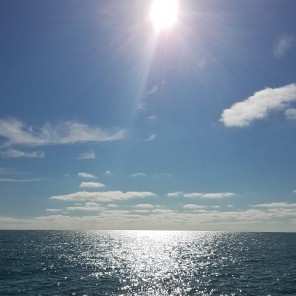 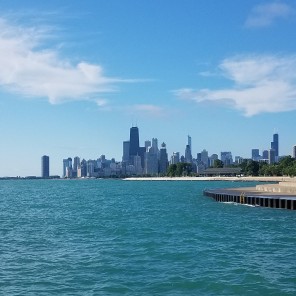 With my bags packed and the weekend over, I managed to discover yet another scenic stretch of the city I’d someday like to run on, the Chicago Riverwalk. Just before I hopped onto the blue line to O’Hare, I dragged myself (luggage and all) along this urban oasis between State Street and LaSalle. It was magnificent. I suddenly found myself wishing I had another day in town. It’ll definitely be on my radar the next time I’m in the city.

If you have an opportunity to visit Chicago during the months it’s not covered in ice, I highly recommend making time to run some of the city’s scenic locales. And if you have to do it with a belly full of deep dish pizza, Italian beef sandwiches, and Anti-Hero IPA, so be it.

2 thoughts on “Running Away From Home: Chicago”

Leave a Reply to The Chronicles of Hernia: Diagnosis  – The Reluctant Runner Cancel reply