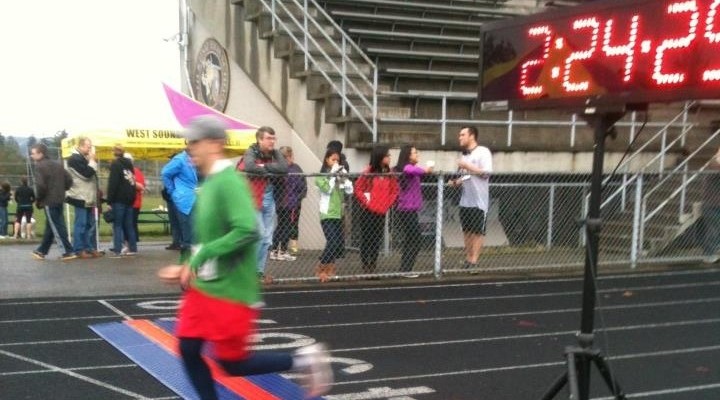 In a couple of weeks I will run my sixth half marathon. Three years ago today I ran my first. It was a life-changing event that started me on the road to becoming a serious runner. I’m still not sure what to make of it all, but I spend a lot more money on sneakers than I used to. To celebrate this anniversary, I’m re-posting a piece I wrote about it from my former blog.

This past weekend something truly amazing took place. Something most people said could never be done. It was a feat so incredible it required months of intense physical and mental preparation. This achievement was so beyond the limits of human comprehension that its importance will be debated and deconstructed for years to come.

Okay, Sunday also marked the day that Austrian daredevil guy jumped to earth from the edge of space, falling 128,010 feet and breaking the world record (and the sound barrier) in the process. But while Felix Baumgartner’s stunt was certainly noteworthy, his accomplishment simply cannot compare to the cramp-defying tour de force that was my sorry ass running 13.1 miles… in two hours and twenty-four minutes… in the wind and drizzle… on a very hilly course.

Fine. I admit it. It really wasn’t that big a deal. But you have to understand, I never thought I’d run a half marathon. Ever. Not because I believed myself to be physically incapable of running that far, but because I just didn’t see the point. Jog a few miles every week to burn calories and maintain the illusion I’m in decent shape? Sure. Run miles and miles and miles over the course of a few months for the privilege of enduring two plus hours of exhausting physical pain and soul-crushing self-doubt? No, thank you.

As the race got underway, I felt great confidence. That lasted about two miles. From there it was more about mental strength. During the race, my legs burned like Lindsey Lohan’s eyes after an all-night bender. But I pushed on. As I shuffled along the course, I questioned my decision: What the hell was I doing out in the cold running a race against no one in particular? What was I trying to prove? Why couldn’t I have met a woman who had an intense passion for billiards?

When I finished the half marathon, my legs hurt like hell and were as weak as a campaign promise. And yet I felt great despite the pain. I’d completed the course six minutes quicker than my goal (did I mention it was windy, drizzly and hilly?), I had my shiny medal, and I knew my next meal would taste much better than energy gel.

Did I drop to the earth from the edge of the atmosphere? No. But I did something I never thought I’d do. And that’s something.

So suck it, Felix Baumgartner! Sunday was my day.

*If you’re wondering what happened to that “super awesome woman” who introduced me to running, I’ve got good news… I married her. We just celebrated out first anniversary on October 11th.

One thought on “Half Marathon Man”